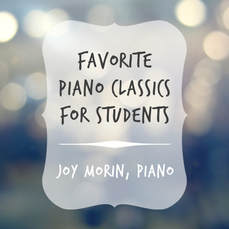 [Feel free to download this image to use as the album art in iTunes.]
This album was created for my piano students, friends, and family in November and December of 2013.  The tracks in this album are piano pieces I remember learning and enjoying when I was studying piano as a young girl.  It is my hope that as you listen, you will experience some of the same joy that I experienced when I first discovered this music — and again as an adult as I revisited this selection of classical pieces.

​In self-recording and self-publishing this album, it was my goal to learn the basics of microphone placement, audio mastering, and syncing audio and video files.  The album has been self-recorded using the Samson Zoom H2 digital recorder on my  5’7” Kawai grand piano.  The tracks were mastered minimally using SoundTrack Pro.  The video files (for YouTube) were taken with my Nikon D7000 and synced with the audio tracks in Final Cut Pro.  The skills I have gained while working with this equipment and software are ones I hope to put to good use in future projects with my piano students.

This album has also been a journey in perfection and expression.  Music is said to be one of the few professions where perfection is not only expected, but assumed.  The digital recorder is unforgiving, particularly when one’s audio editing and audio mastering skills are less than par (as mine are).  My recordings are certainly less than perfect, but fortunately, music is about more than accuracy.  Music is also about communication and expression.  As I prepared these pieces, I spent much time considering how to get “beyond the notes” in order to create a meaningful, communicative performance.  It is my hope that my renditions of these pieces enable the composer’s music to move you or speak to you in some way.

It is an honor to be able to share this album with you.

Note: Many thanks to my dear husband, Paul, for tolerating my hours of practice and providing me with many mugs of hot chocolate.